The solid tuck boxes of Ragnarok are manufactured with hot stamped silver & copper foil and deep, embossed artwork on all sides. Both with a tuck seal applied and actual futhark runes. Manufactured with exclusive tuck stocks that are sure to honor the gods of Valhalla! 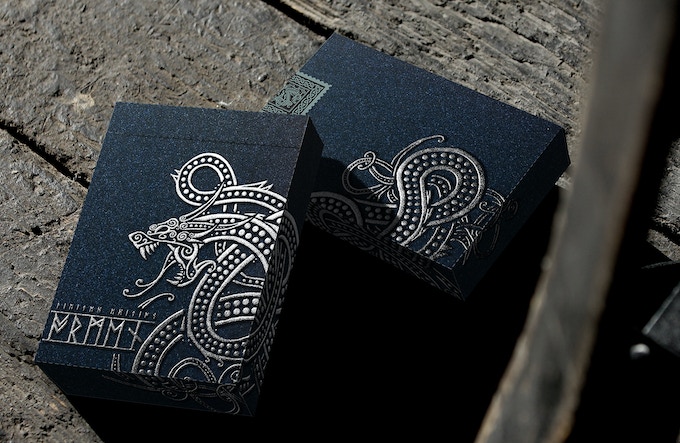 Jormungand wraps around the solid tuck in embossed silver foil, inspired by the norse mammen art style. The blue tint represents the ocean while the serpent is set in silver to represent shiny fish scales. Runes on the front say ‘ORMEN’ in Danish (meaning The Serpent). 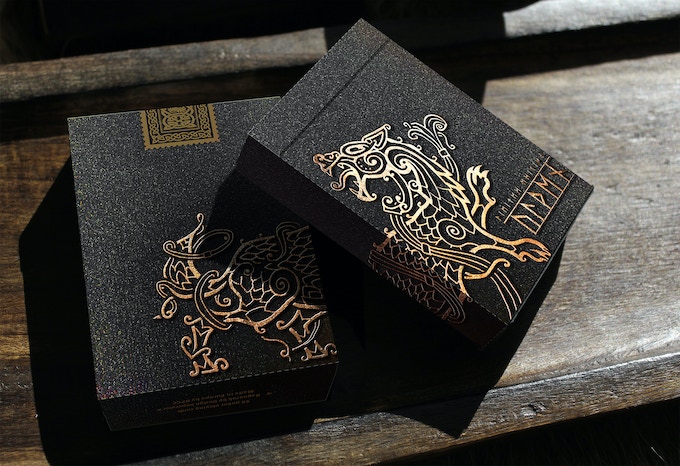 Fenris wraps around the solid tuck in embossed copper foil, inspired by the norse ringerike art style. The golden glow represents the wolf fur engulfed in flames of rage as Fenris is breaking free of his chains. Runes on the front say ‘ULVEN’ in Danish (meaning The Wolf). 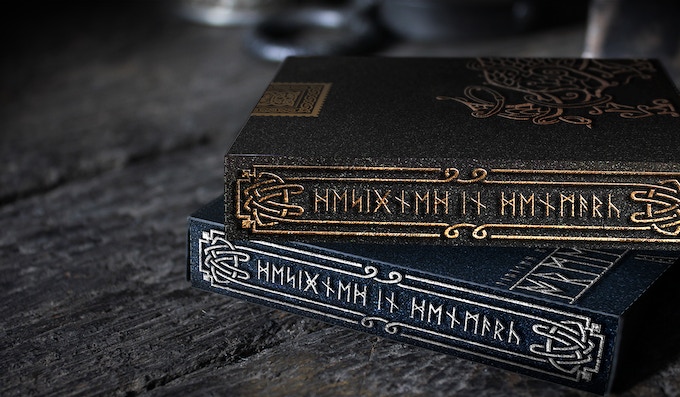 Embossed, metal foiled side panels, saying ‘Designed In Denmark’ in actual futhark runes. For both editions there’s only one side which is free of the artwork ‘wrap-around’.

The Ragnarok tuck seals have artistic cohesion with the card backs of both editions, but collectors will also notice that the artwork connects with the tucks of our Midgard Playing Cards. Tuck seals are numbered individually for all backers of the project. 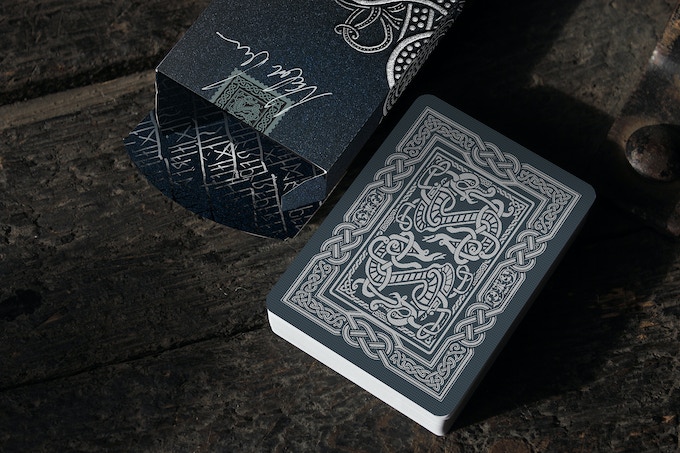 Tucks will have metallic runic inscriptions (silver for Jormungand ed./copper for Fenris ed.)

The court cards feature legendary viking deities and monsters (jötnar) of norse mythology. Illustrations are drawn in hand by professional artist Nicolai Aarøe. All characters are named in their danish form for the sake of authenticity. 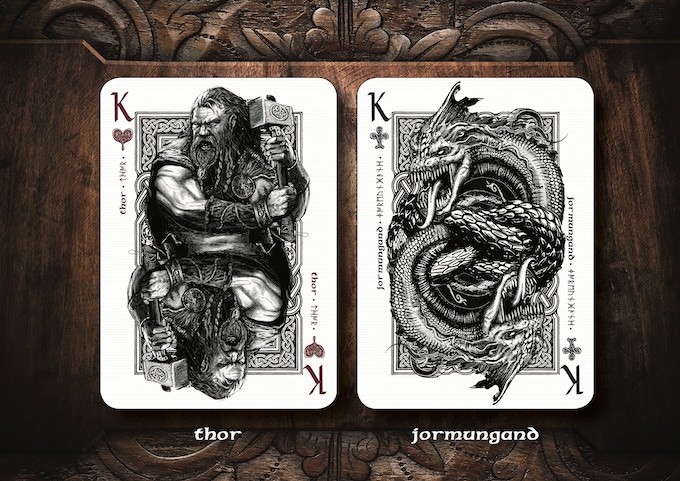 War god Thor fighting his arch enemy, The Midgard Serpent, and wins the battle, but dies from his own wounds. 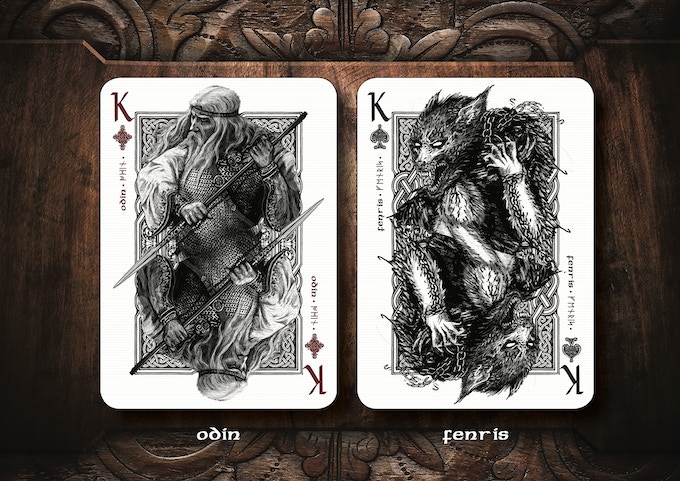 Odin, King of the Aesir, falls in direct battle against the mighty Fenris, who’s breaking free of his chains. 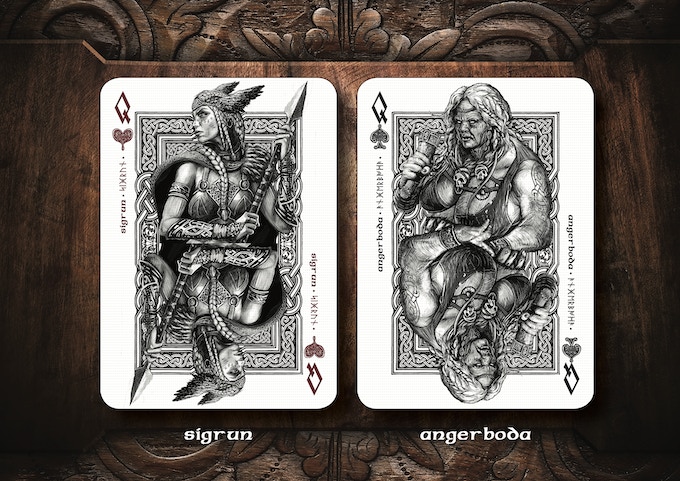 The majestic valkyrie Sigrun facing the jotun queen Angerboda, mother of both Fenris and The Serpent. 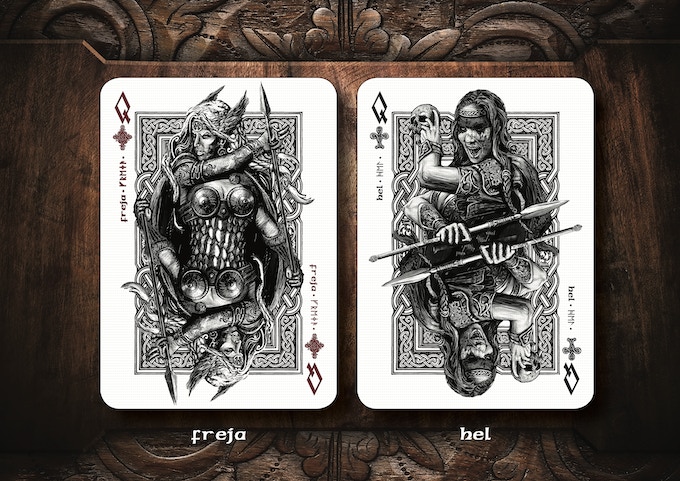 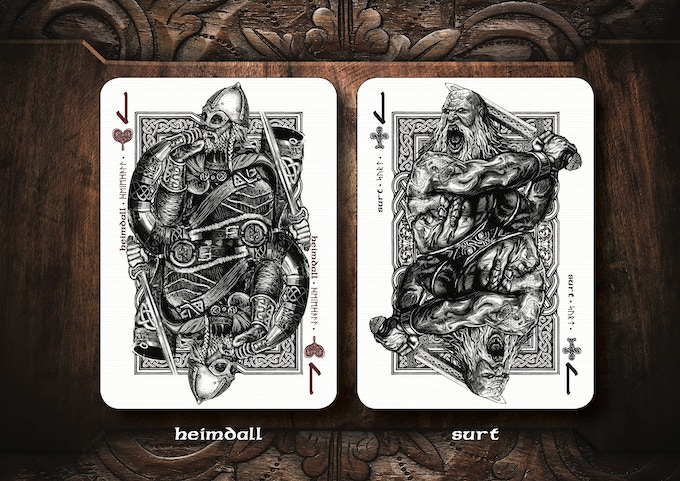 Aesir watchman Heimdall sounding his Gjallarhorn to warn Asgard of the destruction of Surt. 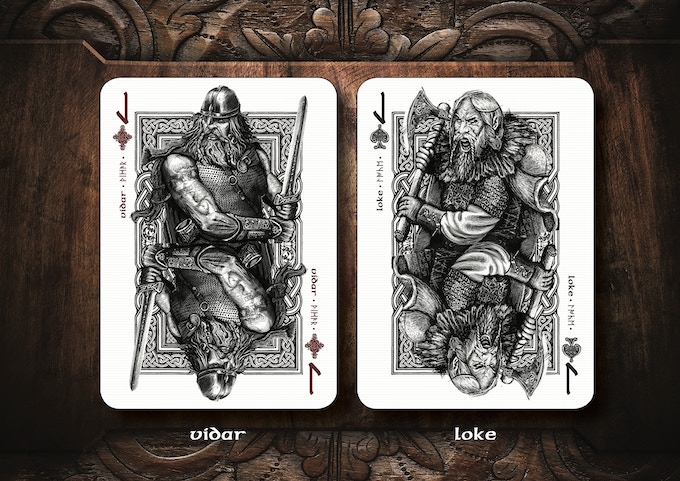 Vidar, son of Odin, facing the mighty Loke, who orchestrates the chain events of Ragnarok. 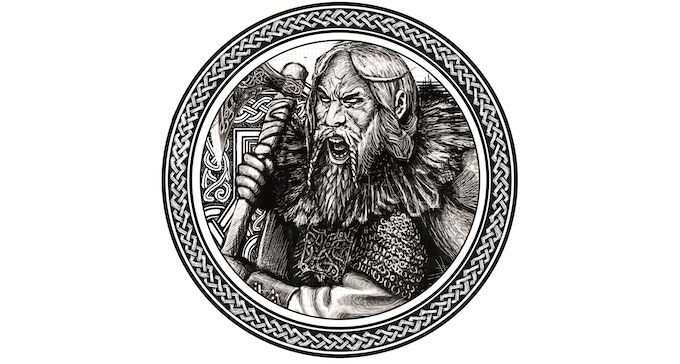 Courts illustrated in hand with incredible level of detail! 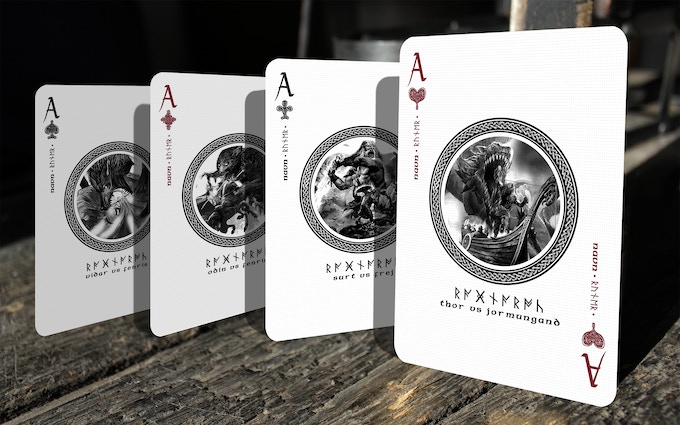 Aces featuring iconic and legendary battles between Asgard and Jotunheim. 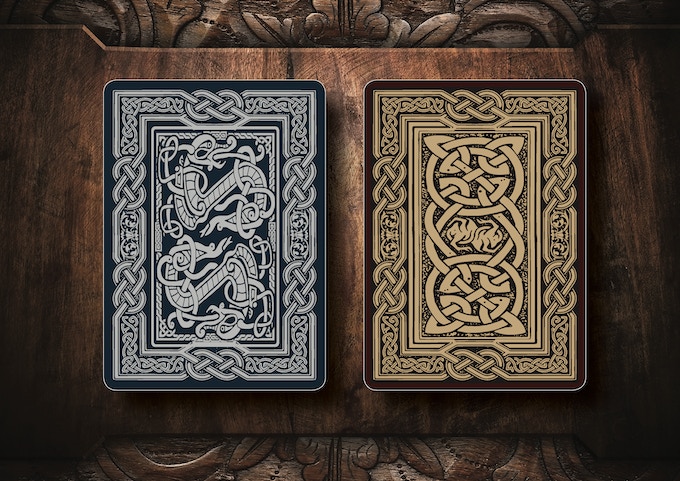 Jormungand roams the deep sea, while the great Fenris is breaking free of his chains 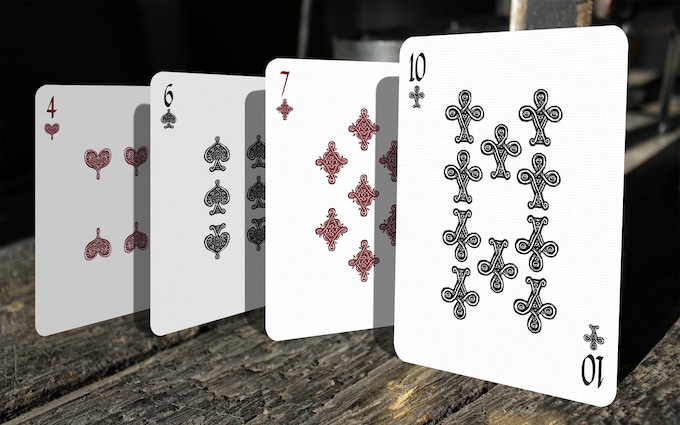 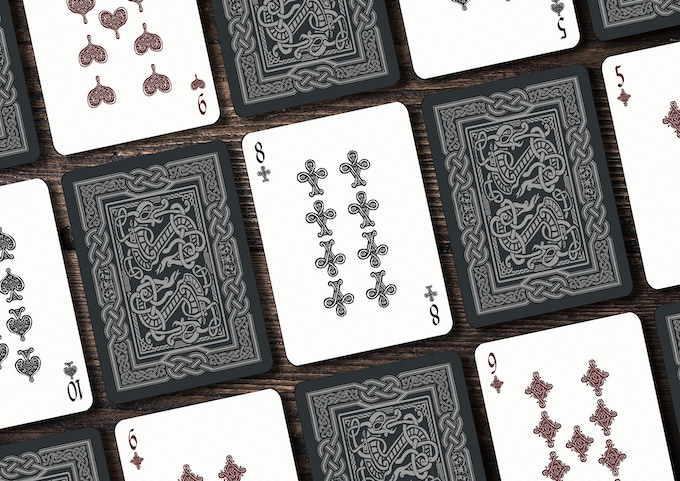 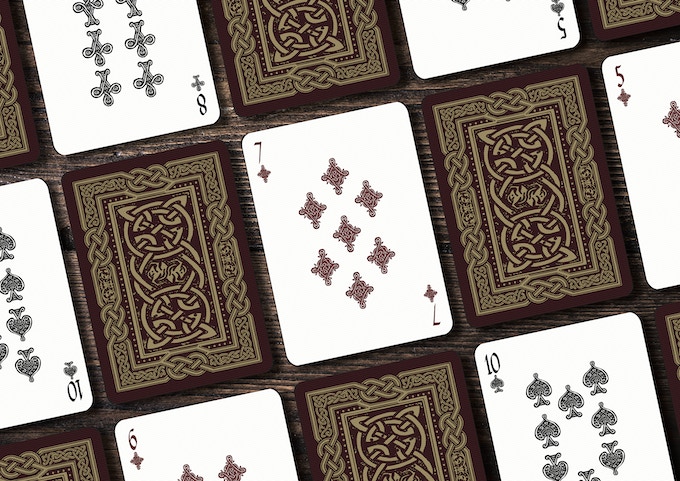 Ragnarok dealer coins are metal coins with a large diameter of 2 inches (50mm). The two sides have different artwork and they come in two very different designs. We call them the Jormungand & Fenris coins. Here’s a close-up of all the sides: 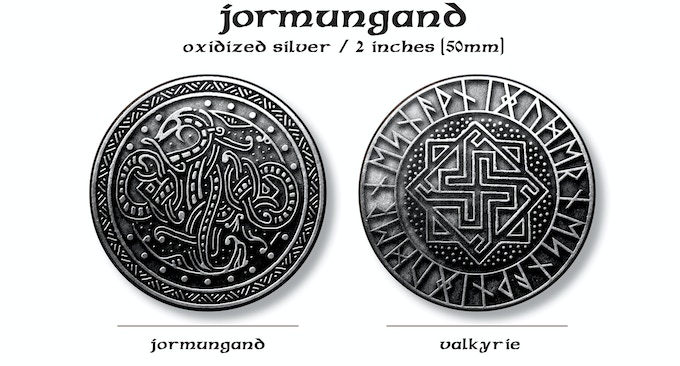 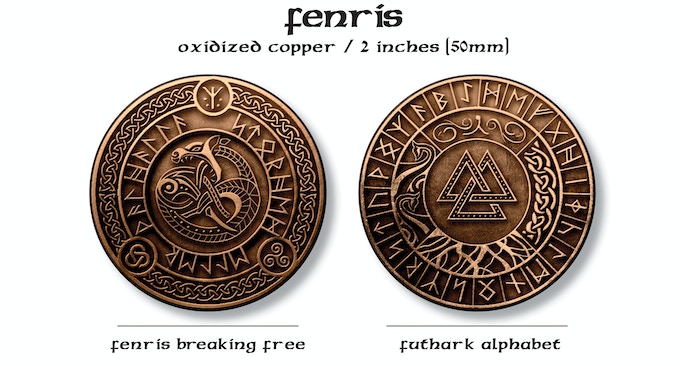 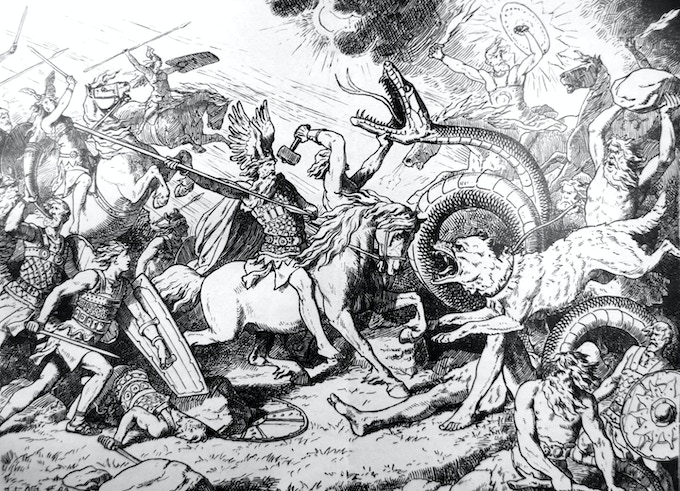 Ragnarok – The Fall of The Gods

In Norse mythology Ragnarok is a series of future events, including a great battle, foretold to ultimately result in the death of a number of major figures (including the gods Odin, Thor, Tyr, Frejr, Heimdall, and Loke), the occurrence of various natural disasters, and the subsequent submersion of the world in water.

Ominous prophecies and dreams had long foretold the downfall of the cosmos and of its gods and goddesses along with it. When the first of these prophesied events came to pass – the beloved god Baldur was killed by Loki and consigned to the underworld – the gods had to face the fact they could no longer escape their tragic destiny. They prepared as well as they could. Odin took a great deal of time and care selecting the ablest human warriors to join him in the final battle against the world-devouring giants. But, deep down, they knew that all of their desperate actions were in vain. Read more

Design Imperator is small group of passionate, scandinavian developers, aiming to bring unique and rare products to the world with your support. Our first three previous playing card projects, Noble, Chivalry and Midgard, were all successfully funded on Kickstarter and delivered to backers with great reviews. Now we are going to crank it up a notch and deliver some of the most exclusive Norse playing cards the world has ever seen. But it is only going to become a reality with your trust, support and the will of the gods.

With Marianne Larsen as head manager and creative supervisor, we’ve gathered a team of experienced creators to accomplish our high ambitions with Ragnarok Playing Cards. Nicolai Aarøe (lead artist) and Svend Nielsen (creative designer) have been a pleasure to work with on this project – and this is only the beginning of our journey!